Feel the magic of the Wadi Rum Desert

Have you ever dreamed of waking up by the first streaks of dawn in the middle of a gorgeous dessert?  Or riding a horse galloping towards a sinking sunset against the never-ending, rows and rows of sand dunes? Now the chance is at your fingertips. Come discover Wadi Rum the Jordan desert in a different way, get in touch with the nature on horseback, and enjoy the mesmerizing colors that only a spectacular desert can offer.

You could have seen the unique and out-of-the-world Wadi Rum, an UNESCO heritage, in many movies. But with our devoted and experienced guides, as well as our horses of course, you would have more –to be genuinely reconnected with our nature, enjoying the tranquillity while having an eventful journey filled with adventures and amusements.

We are looking forward to giving you the most wonderful experience you could ever dream of in this magical place in Jordan.

Our team, our horses and Wadi Rum are eagerly waiting for you.

Wadi Rum, also known as the “valley of the moon”, is located in Southern Jordan, 45km north of Aqaba. As a protected area you are not allowed to hunt, or drive off the formed tracks.

Wadi Rum protected area is a UNESCO Heritage listed site. It is 720 square kilometers of varied desert landscape consisting of narrow gorges, natural arches and towering cliffs rising form the flat valley sands. Networks of honeycomb rocks stand weathered by the wind and rain in a palette of desert hues.

Wadi Rum was once a Nabatean outpost on the trading route between Saudi Arabia and Petra in the last century BC. The ancient nomadic Bedouin tribe used to roam the desert and traded with the Romans. There are the ruins of a Nabatean temple, just behind the rest house in the village. The capital of the Nabatean Kingdom was the famous city Petra.

The highest point of Jordan is found in Wadi Rum, on top of Jabal Umm Ad Dami – 1840m above sea level. From the top on clear days, you can see Saudi Arabia and the Red Sea. Located 30 kilometres from the village it is a good hiking option with a guide.

Jabal Al Hash also a known mountain for hiking gives you a view over the Wadi Sabet and is located in the Al Forah area at the border with Saudi Arabia.

Khazali canyon is an easy to explore narrow fissure that cuts into Jabal Khazali. Continuing for about 150 metres, on either side along the way you can see well preserved inscriptions and petroglyphs made by the ancients.

The Lawrence’s spring and Lawrence’s house have their name after the British officer Thomas Edward Lawrence who came during the Arab revolt of 1916-1918.

The village itself is composed of approximately 1500 people are descendants of Nomad tribes. The majority have now settled in houses in the village so their children can go to school.

Around the village there are 6 springs. These springs are used to water the vegetable gardens and keep the sheep, goats and camels hydrated.

Summer is hot during the day so think about bringing sunscreen and a hat if you are prone to getting burnt. There isn’t much shade in the desert and the sun can be unforgiving.

June, July, August and September are the hottest months with daily temperatures above 32°. It is not uncommon for it to reach over 40°.

Winter the days can be fresh and the nights are cold. You will definitely need a jacket. When it rains in winter we hope to fill our water reservoirs built near a mountain to collect the water falling from that mountain to provide water for the grazing animals for the remainder of the year. It only rains in winter time which is a very short period. December (15°/4°) and January (14°/2°) are the coldest months of the year. If you are lucky you may even experience snow in the desert.

You can observe animals in the Jordanian desert like foxes, hedgehogs, birds and the famous desert Oryx which is a national animal.
The Arabian Oryx is smaller than its African cousin and unfortunately they are kept in a private reserve because they are an endangered species. Some of them have been released in the wild. They are part of a breeding program to be reintroduced into the wild.

Food to experience in Jordan.

The National dish of Jordan is Mansaf which is made of rice and meat (mostly lamb but for the tourists prepared with chicken) with a yoghurt sauce.

Maqluba or upside down is made with rice, meat and fried vegetables and when served flipped upside down. So tasty.

Zarb is a Bedouin barbecue made underground. The food is placed in metal racks and put into the ground with hot coals and covered with blankets. This is the dish we serve the most when you are staying overnight with us.

Shrak is a traditional Bedouin thin flatbread popular throughout Jordan and the region.

Getting to Wadi Rum

Wadi Rum is located in Southern Jordan off the main Desert Highway.
We meet our guests at the village rest house, located 12 kilometres past the Visitor’s Centre. Please get in touch if you would prefer assistance booking a taxi. If travelling by car, parking is free in the village rest house car park. Below is information on how to get to Wadi Rum from Amman, Aqaba and Petra. Please contact us if you want further details.

From Amman to Wadi Rum

Wadi rum is 324km south of Amman and takes approximately 4 hours by car or taxi. There are petrol stations and food options along the way.

Petra is about 110 km from Wadi Rum and takes approximately two hours by car or taxi.

From Aqaba to Wadi Rum

Wadi Rum is 75km from Aqaba and takes approximately one hour by car or taxi.

What to know and bring on your horse riding trip? 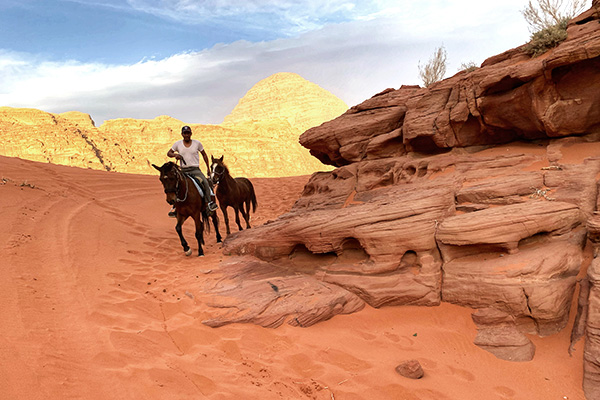 6 days on horseback into the beautiful Wadi Rum desert. You can enjoy the landscapes at horse’s pace... 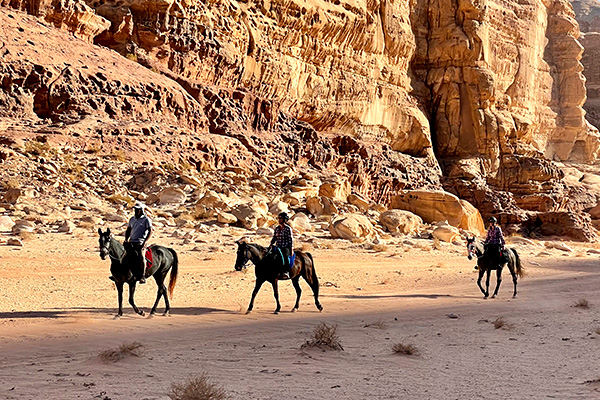 During this 5 hour horseback ride you will visit the Lawrence’s spring, the sand dune and the Khazali Canyon... 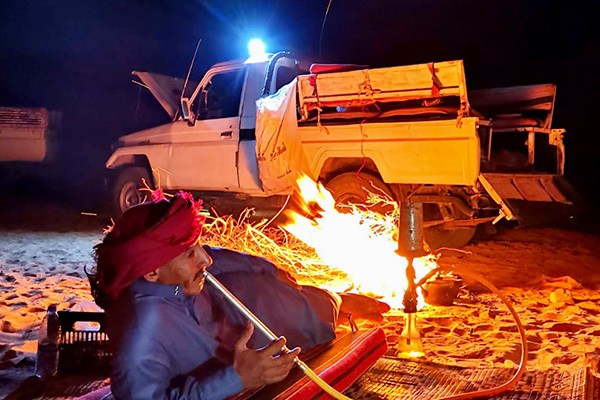 This is a 5-6 hour horseback ride where you will visit Lawrence’s spring, the sand dune, the Khazali canyon... 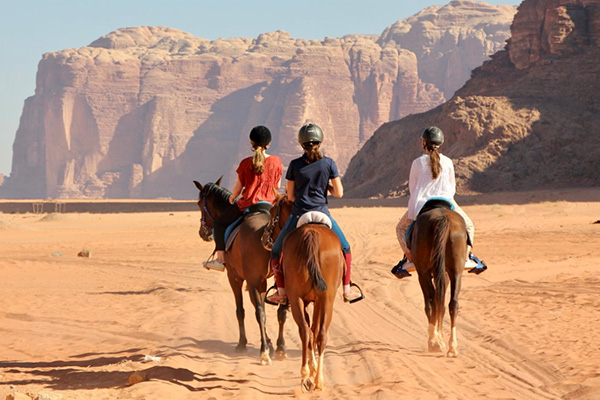 During the three hour ride you visit on horseback the sand dune, the Khazali canyon and the small arch before heading back to the village...

Some pictures captured during our tours

Plan an unforgettable experience with our team!